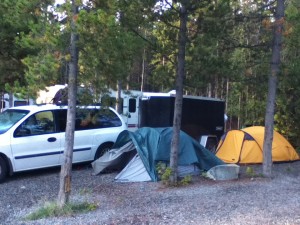 After a long drive from Dawson City, we were back in Whitehorse once again!  As soon as we arrived at the campsite, and started putting up the tents, we realized that our
friends were still here in the same campsite that we left them in on the way
through. Before saying another word we were over there and standing right in front of their door. Once we knocked we could hear footsteps coming towards us. As we looked at each other, the door opened and out of the trailer stood the one and only Casey in
surprise. After saying “Hi” and “How are you” we told him of everything that happened since we last saw him; such as Alaska and how cold it was there (although it wasn’t much colder than Whitehorse).  Once we finished talking, we went back, set up the tents, and had dinner. Later that night, we were invited to their campsite to have smorse
with them and their relatives. Definitely a night to remember! The next morning we had breakfast and went over to play with Haven, their daughter. When we sat down together we started playing “duck, duck, moose” which is basically in NZ “duck, duck, goose.” After two minutes of playing, they had to leave for the day to go help left supplies. No matter what Casey said Haven wanted to stay with us! In the end, she had to go for the day which left us at the camp bored! We decided we would go check out the fish ladder once more.
Last time we were there about a month earlier, there were only a small amount
of fish waiting to be let through and this time was completely different. We were looking forward to seeing them in action! They were all gone, not one small fish wanting to be let through.  Disappointment! However, the woman did say they had just let three go before we got there! Drats, we had missed out on seeing the fish ladder in action at its busiest. The good news was this year they had counted 1371, much more than 672 the previous year. Later that night we weren’t able to have a fire like we did last night because Casey was feeling sick. He blamed it on the stew his wife made. Although it tasted good, Casey obviously had too much of it! The next morning was freezing and too cold for us to stay
another day, so we packed up our tents and gear and just before leaving we went over to say goodbye.  It was zero degrees! Only Casey was awake so we had to ask him to pass on the message to Haven and Tracey. They are definitely one of the closest families
we’ve met on this trip!