While we stayed in Dawson City, we witnessed a very special day which commemorated an event from 100 years ago. On this day they held a memorial service, which is dedicated to four men whose lives were lost. They were Royal Canadian Mounted Police who died of starvation between Fort Macpherson and Dawson City. They took a wrong turn which lost them a week and their provisions were meagre for a 30 day trip. Not just that, the food they did take was not high enough in fat. An important ingredient when your body is trying to keep warm in zero temperatures.
It started off as a battalion of Royal Canadian Mounted Police in full dress uniform. 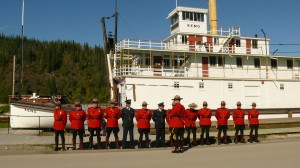 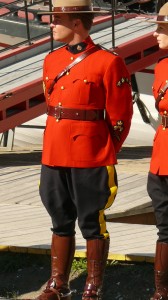 They and the police of the town marched a good kilometre towards the R.C.M.B HEADQUATERS. Once there, they gave half an hour of speeches, a woman singing the Canadian National anthem and a play telling us about the men and why they were important.Because it was the 100 year  anniversary they decided to do this service. The stone statue was unveiled and it was good to be a part of it and understanding how rough it was living up here in those days. 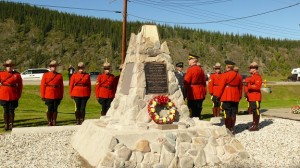 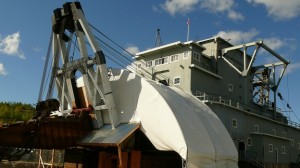 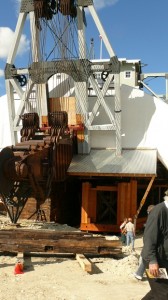 It is located just outside Dawson and was invented by two men from New Zealand who sent the plans over to the Canadians. They brought it all the way to the riverbeds in pieces and put them altogether there and floated it. There were about a dozen on that riverbed in its lifetime. Of course it is not active at the moment but they still let the public in for tours to show how it used to dredge for gold here in the Yukon area.
When it was working, it was basically floating on a small pond where most of the gold is located in that area! It moved a long way up the riverbed while it was operational. It was interesting looking at all the old equipment and engineering they used years ago. Although, most of the time we were drinking free lemonade and biscuits. The dredge itself doesn’t work anymore, they are still restoring it. Some of the wood is rotten. The dredge itself had been sunk when the damn burst upstream. They put it upright and have been working on it since the 1990’s. We watched what tools they use and how big the wood is when it arrives. The wood is from trees 6 -700 years old. Nothing is wasted. They are using the same type of wood they used to build it at the beginning. 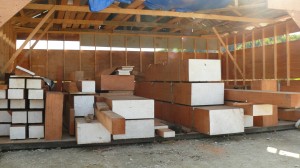 All the tools are old. The only way to fix it is by using the old techniques. It cost a lot of money to do this which is why they don’t let one bit of wood go to waste, even if it’s old! 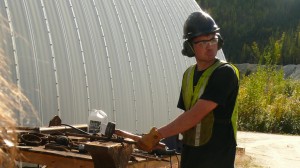 Once the tour ended, we went up the road to search for gold for free in the river. We decided to use our old bowls since we weren’t well prepared! This man gave Braden and Lara a hand since this was their first time. 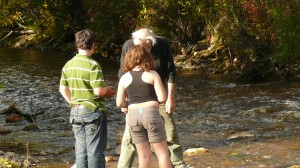 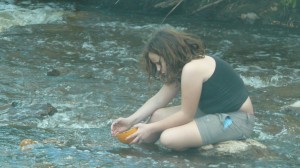 In the end they accomplished nothing. Not one piece of gold.  I see why it was so hard to get back then! We all enjoyed the great experience of the dredge and getting to see how it worked.