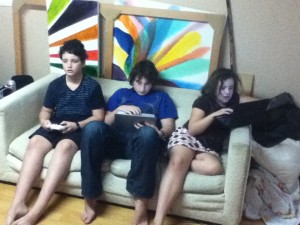 I didn’t sleep well the night before we left Seattle.
Perhaps I knew what was about to happen?

David and Sean left before I woke up to go down to pick up Astara forty minutes away. I started cleaning the apartment and put the washing
machine on with a few last things to clean. Ten minutes later there was a knock at the door and I opened it to a woman saying “are you having a flood?” I looked at the floor.  The laundry beside me was an inch deep in water and coming out to meet me. “Oh No” I said, she replied “I’ll get the landlord” and fled down the stairs. I called Braden and Lara to help find towels. We pulled out everything we could find and dropped them in the water. The water valve in the machine must have stopped working. I turned it off and tried to get as much off the floor as fast as we could, as it was dripping down the walls inside the woman’s apartment downstairs.  What a nightmare!  We frantically worked until the landlord appeared with more towels ten minutes later. It was still bad and he was not happy, as if it was our fault!  It was obvious the washing machine was old and as we found out later his responsibility to have it repaired as it belonged to the flat.

David, Astara and Sean arrived looking astonished at what was going on.  They surveyed the mess in shock and the odd negative comment escaping the landlord’s mouth and decided on a quick exit. Piling as much into the van as fast as we could was the best option to get out of his hair. It was not how I wanted to leave John’s place as I had wanted to have it looking it’s best for him coming back home soon, but fate had other ideas!  David gave the landlord $250 to smooth it over - money always talks!

With Astara in the car we all jumped in and further down the road all laughed at the quick getaway! What was that all about? It felt like the beginning of the trip in Dunedin when the taxi van broke his window on the shed!

Anyway, we were on our way to Jeremy’s in Vancouver. Nothing was organised properly in the car and the kids were boxed in like astronauts on a space shuttle mission! David drove through to Vancouver with Astara directing us through Little Rock on the way for a look see. Pretty place!

Getting to Jeremy’s was straight forward and we unpacked all
our gear into his flat and went out for a meal together with him and Astara at a Vietnamese Restaurant nearby. It was a fitting end and a nice way to farewell Astara. She climbed into the van with all our paperwork to get her through the American border and we all waved her off. It was sad but I know we will be seeing her again ahead sometime when the time is right!

Jeremy shared his flat with Justin and Kareem. Two easy going guys who didn’t mind a family of five kiwis sharing their space. It was nice having their company when they were around. They had the most amazing  amount of movies and programs ready to be watched on their flat screen. The kids loved it of course and barely moved from the sofa the whole week!

Jeremy slept in the lounge at nights and the five of us slept comfortably in his room. It was a fun time together. Outside was quite cold, a few degrees colder than Seattle so we only went out when it was fine.
David and I had a few good walks around the area trying to work out how we would get all five and us and our gear to the train station. There was a train station a thirty minute walk away which went to the airport. We had accumulated a lot more since we had picked up more gear with the motorbike in Seattle. I thought we could get a shuttle bus, but when I googgled it the first thing on the Google page was an advertisement for a limousine company. Hmmm. Now that would be a good way to leave our tour! I rang and found out a price, $65 plus taxes not bad. Could we afford to shout ourselves?

We enjoyed Jeremy making smoothies using ingredients we would never have thought of putting together! Lara became his right hand girl in that respect and we all looked forward to them. Jeremy mentioned that he had some clay if the kids wanted to model with it. Lara took to it straight away and Jeremy patiently showed her how to take a photo every time you moved the model slightly. 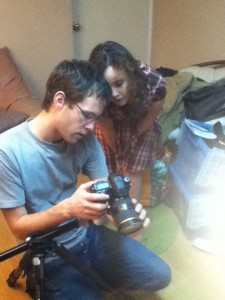 I was so impressed at her patience. 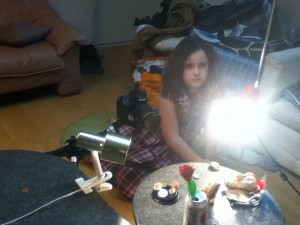 She spent half the day diligently doing it. I mentioned my Great Uncle Fred O’Neill had done the same thing many years ago. He won awards at the Cairns Film Festival for his work! I wondered if he was watching with interest with what Lara was up to!

Here is a link to his Plastiphobia if you are interested, it’s really quite good!

One night on the 10th of November some friends from Jeremy’s school came over. One of the girls was interested in what Lara had done and showed us her work on her laptop. It was amazing seeing how far
animation had come. All of a sudden I realised this was going to be a “fit” for Lara. Having dyslexia has made it difficult for her at school but I could see a pathway ahead for her opening up. We were definitely meant to meet this girl and Jeremy!

On the 11th of the 11th of 2011 I couldn’t believe the change in energy flooding the planet. I was consciously aware of the Gateway opening up and felt it as a “wave of LOVE” which I picked up on the night of the 10th. It felt like the biggest Christmas EVER, that’s the only way I can describe it! It was so good to be in Vancouver helping in our own way. Exactly where we were meant to be!

I had friends in Sedona and Machu Picchu doing ceremony in
groups to usher in the new energy. I would have loved to have been a part of that! As I type about it now I am still getting goose bumps! What a magical day! It is such a privilege to be on the planet at this time and experiencing the changes within us that are affecting us all!

The next day I realised I felt different. It is hard to put it in words but it was an “inner knowing” that everything was “set” for us in Australia. It felt as if there was simply nothing to worry about as it had all been taken care of already - I was delighted!

After spending the last few days organising haircuts and clothes for summer in Australia the bike shop in Seattle rang David a few days
before we were leaving to say we needed to pick up our motorbike! They hadn’t mentioned that there was a time limit on how long they would hold it for!

The motorbike would suit Jeremy down to the ground. It was perfect for him. We offered it to him for a good price and he took it. It was meant to be his all along! We had to leave the papaerwork with him to sort out as there was no time to do anything else!

Finally we came to the conclusion that we should get the limousine to the airport. That’s obviously why I had seen their advertisement first! Always trust what you notice first! It saves for a lot of time!

Everything in this world is meant to be easy and effortless if you are in the flow. After many years of trying things in and out of it, when my inner feeling has told me better; I have now decided to consciously look for where the flow is. It is so much easier to just join the slipstream and let the Universe bring us our best life; we just have to learn to trust it.
Of course it can also mean you have to confront your fears having to de-program ourselves with learnt behaviour over our own lifetime! 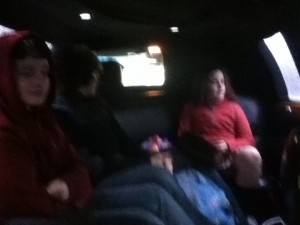 When the limo arrived on the day it was enormous, and the kid’s
looks were priceless, as we all sat laughing and talking on the way to the
airport. It was such a buzz!  Sean was determined this was just the beginning for him on his way to stardom! 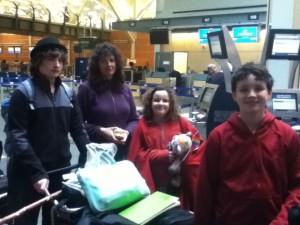 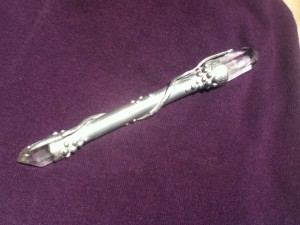 David was horrified I had packed it in my hand luggage. I always want it close. I was wondering if I was going to lose it, but the Angels were beside me again. Satisfied it was okay, it was allowed through. There was another check in to go through when we changed planes in Brisbane. I wondered how that would go.

Settling into our plane seats we all exchanged smiles and I remembered a paragraph in Tim Ferris’s four hour work week book. A woman counted her children’s heads on the plane after they had been away a year
sailing from France to the Caribbean. Their life was changed and they were never the same again after travelling with their children. There whole approach to life and what they wanted from it adjusted accordingly.

I looked at our three and congratulated myself on what we had given them. It had been quite a year. They had learnt compassion and trust,
enjoyed the company of new friends we’d made along the way and been involved first hand in my own and their spiritual awakening. They could talk confidently to anyone. You could not replace this year. The things I had been able to teach them first-hand about life and its magic would have been difficult for them to grasp in a normal day to day setting.

We were all safe and sound and had a whole new perspective on life. We are all so much more grateful…for everything we have in our lives. Their experiences I believe will hold them in good stead ahead. I wondered what my role was going to be ahead and where we were going to end up!

I had one thought in my mind “Now the REAL FUN BEGINS!!!!”