From Whitehorse we had a two day trip back to Dawson Creek. We had a night at Liard River at the camp and enjoyed the hot pools again. This time we saw a black bear on
the boardwalk and we had to wait for it to move!  Mum and Dad had another swim in the morning before we left.

The car was starting to overheat for the first time so we took lots of breaks until
Fort Nelson. We stopped at a workshop and found out we could get the car
serviced in Dawson Creek and the transmission looked at there. The OD light
kept flashing on the dashboard.  For some reason it rained again at Fort Nelson like it had on the way up through here. I quickly pegged the tarp over Mum and Dads tent as it started. They were really pleased when they came back and found it already done! 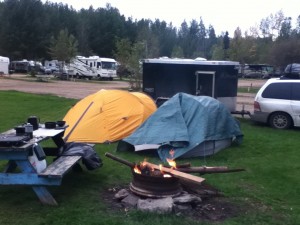 The next day we stopped a lot of times and watched a movie in the car while the engine
cooled down. It was a slow trip but at least we made it. It was good to arrive
at Dawson Creek again. We had stayed a few days here on the way up going to
Alaska and had enjoyed the Mile ‘O’ campground!

Once we arrived at the camp, we set up the tents and got out the cooker and made some
baked beans and eggs.

After a nice dinner we went to go find someone to play with. We found a boy called Seth
and his sister called Cadence. We went swimming with them and one day when they
were helping their Mum at kindergarten my sister and I road on their bikes.

Every night there were so many flying bugs that when we ran they went in our eyes and
up our nose.  I found out that those bugs fly in your hair and bite behind your ears “gross aye!”

We stayed at Dawson Creek for seven days and had the car serviced.

On the last night we saw the northern lights in the sky at 10.30pm, it was
green and red and it was always changing shape.

Once it left, we went to bed. We were lucky to see it!

When we woke the next morning we packed up and said goodbye to Seth and Cadence and set off for our next destination; Jasper National Park

This entry was posted in Peru, Braden. Bookmark the permalink.