We’re on our way, on our way to happiness today! (Corinne) 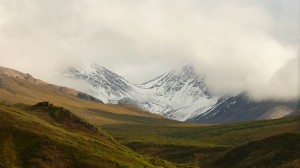 Packing up in Anchorage we began talking to a man with two huge dogs which loved nuzzling up against us! Wouldn’t you know it; he had actually worked at Denali National Park! 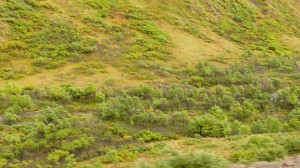 He said if we were arriving late it was best to go on the late shuttle bus through the Park anyway as that’s when the most animals came out.

That was now the third time we’d heard about Denali! We were getting plenty of signs to go there now…

Driving out of the City we were shocked to run into bad weather; rain, rain, rain. We pulled into a town which had a Walmart and spent the next two hours happily engrossed in buying watches, jeans, gas for the cooker etc.

It was still raining when we came back out. It didn’t look like it would be worth stopping at Denali after all. I wondered why I had been getting so many signs to go there. It was pouring and slow going!

David had always been keen to get to Fairbanks as the visa waiver was getting short. I fell into a doze and when I opened my eyes thirty minutes later I smiled. We were just about at the Denali National Park turn off and the weather had miraculously cleared! We could camp without rain!

Finally locating the Wilderness Access Centre in the Park at 4.40pm we asked when the next shuttle was. It was at 5 o’clock and went until 11.30 tonight. We didn’t have anywhere to stay but decided to grab the bus anyway and worry about that later. I dashed back to the car while David purchased the tickets and booked a campsite nearby. We scrambled to get our snack food together and warm clothes for the bus trip.

Lining up for the bus with our warm coats and food, I smiled knowing that we were meant to be here all along! 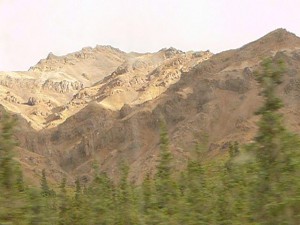 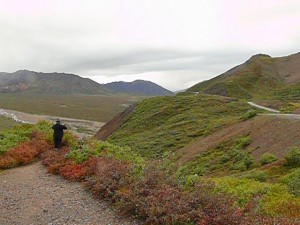 I had no idea how beautiful it was going to be. Why is it, the best places are those that are protected from us humans? 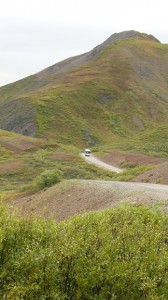 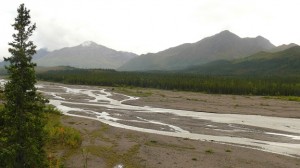 The valleys, mountains, trees and rivers were incredible. The dazzling colours even at that time of night were amazing to me. I loved it all! Every bend brought another panoramic view! 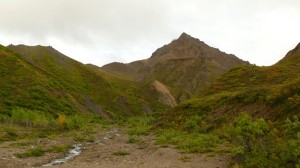 I was so glad we had come! Seeing wildlife as well was just an added bonus! 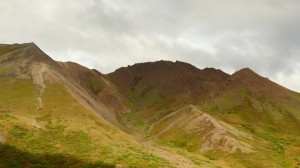 The first surprise was the wolf that sauntered past the bus which the driver spotted. Tall and sleek he looked at us with no fear at all!
It was good to see. 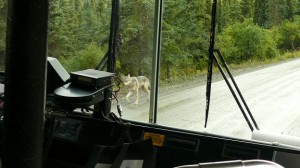 At the river stop halfway we looked at the moose and caribou antlers on show.  The kids had some fun with them! 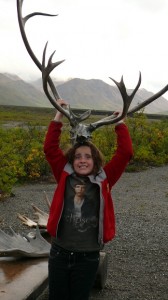 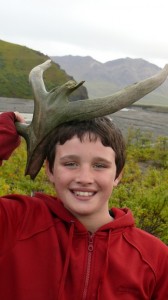 On the way back a grizzly ran across the road. Its fur looked black with the rain. Sean was surprised how fast it could move and shot a video! 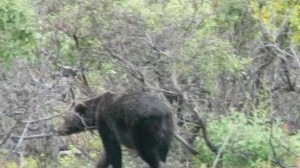 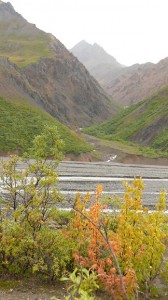 The next thing we saw was a falcon, and then a lynx ran across the road with its two eyes reflected in the bus lights. Too fast to get a shot but we were grateful to see it! 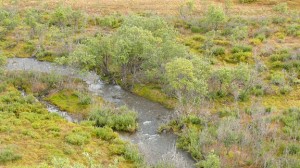 Chatting to a great couple – Bryan and Elaina they told us they had three children too. Their oldest was 27 and their youngest 18. She was 45 like me!

They confided they had just finished fostering four little souls under five and from the same family. They had only asked for two to foster but there were two more children and they had opened their hearts and taken them all in! What a wonderful thing to do! They had them for a year and had only just passed them on to be adopted two weeks before this trip.

Bryan had to learn Spanish as the children were Latino and they were going to an uncle who spoke Spanish. The more I spoke to these two the more I liked them both! 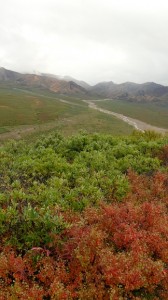 The time went quickly and the kids loved practising some Spanish with them. Before we knew it we were back at the start and saying goodbye to them both. The bus driver mentioned a free dog sled show the next day at 10 and 2.

Sounded perfect for us! We would look forward to seeing that!

The camp was close and for the first time we put up two tents in the dark and close to midnight! It took us a while to find a free tent site.

There’s a first for everything and as we’ve discovered you just have to go with the flow!