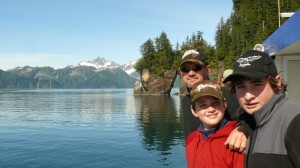 We keep hearing how lucky we are and it’s true! 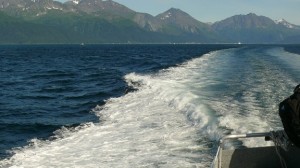 Oh my. We had booked our boat cruise on only one of ten sunny days that Seward gets in a whole year. The weather Gods shined on us all day! 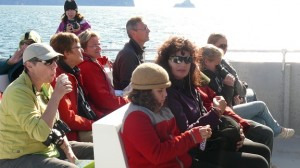 We had a glorious time. Even spending most of it outside on the deck! The water was flat and every mountain and Glacier was visible to us.
What an amazing sight. We felt blessed seeing what so many never get to see! 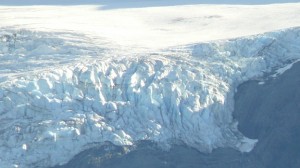 There are so many Glaciers here. It is quite incredible. 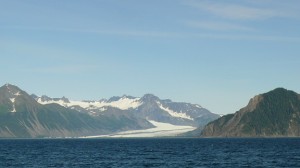 I wonder exactly how many Alaska has. Plenty I’m sure.

On the way we stopped to see a small 25 foot humpback whale cruising through a bay. It was great following quietly behind as it chose to skim around the edges of rocks for fish. When it went under we had no idea when it was going to pop up next! 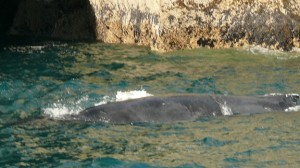 Heading up towards the Aliak 10,000 year old Glacier we slowed again as the Captain Chris told us he’d spotted a “raft of otters”. 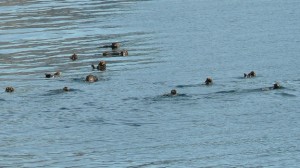 They were so funny bobbing in the water in a group with their flippers out and tummies up out of the sea. 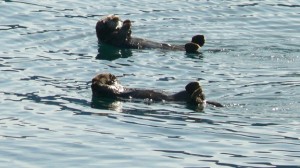 He told us they only touch land 1% of their life. Imagine that! Also they have the thickest fur in the world, a huge number of hairs per square inch. They have a pouch of skin under their arm which they can hold a stone to help break crabs or shellfish. Sometimes they are seen floating with a rock and a shell on their stomach. 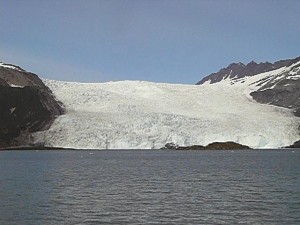 Pulling in close to the Glacier we were allowed to get close because of the perfect weather conditions. For half an hour we marvelled at the beauty of the blue ice and strained to see bits fall into the water. 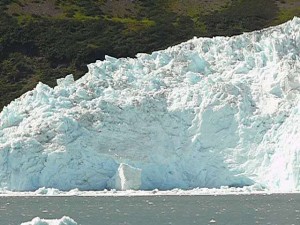 Chris the Captain had already warned us if we hear the sound then we’ve already missed it as the sound comes later out here! 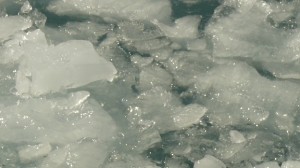 The sea was full of bits of ice bobbing in the water. Later we got to see a piece up close as they scooped some on board.

We were fortunate enough to see another humpback whale on the way back and this one thrashed the water with its tail before rising out of the water and spinning mid-air.

Not only that we had some friendly porpoises swimming through the waves at the front of the ship for a good fifteen minutes. 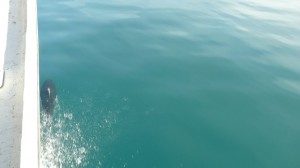 Slowly moving through gorgeous islands of rock we were shown different sea birds and chicks. It was interesting to see the gulls going nuts when a bald eagle flew overhead. 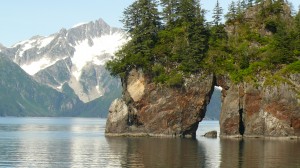 We learnt a lot about different puffins, penguins and even gulls! 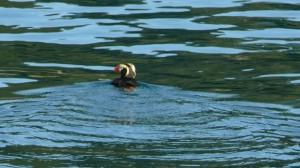 Chris was a wealth of information and the children were highly entertained. In fact Lara and Braden ended up in the Captain’s chair in the cabin with him talking to him about our trip on the way back! 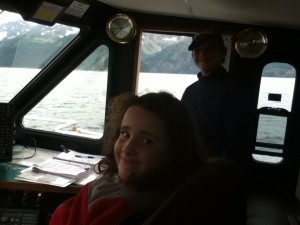 There were also quite a few seals which made entertaining viewing as we drifted past. 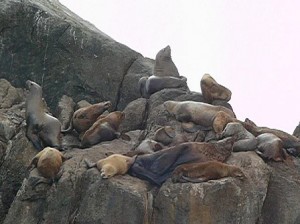 One was always barking at another! Usually the biggest standing its ground!

Arriving at Fox Island we had a surprise in store for us!

The Park Ranger giving the presentation was someone we had met in Ecuador! 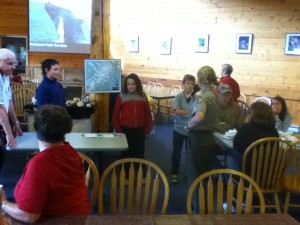 She recognized David and then the kids. Apparently this was her first day working on that island.

I don’t believe in coincidences. We were meant to meet again! Who would have thought it would be way up here in Alaska!

Finishing the boat trip and saying goodbye to the friendly crew and Captain we walked happily back to camp. Jen our friend arrived within thirty minutes and we walked the whole 300 metres to their house (it’s a wonder we hadn’t bumped into them earlier!)

She hid as we knocked on the door to surprise Dan her partner.

He could only gaze at us all in astonishment and kept saying “No
way….no way!”

She worked up here each summer and he was able to do work at
home. I could see why she didn’t want to give up a job like that! In the winter
they try to travel somewhere new. The kids were delighted to see someone they
knew and enjoyed their dog who was very excited to meet us all!

We are looking forward to getting our own dog after meeting
so many delightful faithful friends on this trip!

David had booked a three hour kayaking trip for the next day for him and the boys. Dan knew the guy running it. They wanted to know our plans ahead and mentioned before going to Fairbanks we should stop at Denali National Park on the way.

“It was famous” they said. It was something to keep in mind. It sometimes feels as if we are travelling so fast we are learning about where to go on the run!

Somehow we always get the best tips on where to go though, and as I found out, we had
Denali mentioned to us three more times by different people before we made it there. But that’s another story!