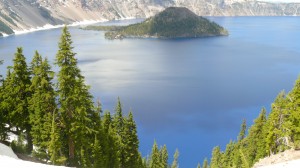 After such an amazing time at Mt Shasta we travelled along the roads towards Crater Lake. I don’t know about the rest of you, but I am always excited to see what else I see or hear after finding out about such
magical, mystical information!
With me, as I think on things, I see or hear words or feelings which give me the answers to my questions. Now Patricia has taught me even the animals that come near you mean something! As we all know God speaks
to us in “ALL WAYS” we just need to listen!
I was questioning in my mind where all this was going.
“High Destiny” a Huge Store sign read.  I decided to mention it to David a few miles further down the road. As I was telling him, he saw a sign on his side of the road “A Step Back in Time”. So whatever we will be doing ahead, we will be drawing on the energy of our past lives. Perhaps from Lemuria. The first continent on the planet where we all lived together peacefully and in pure harmony with each other and Mother Earth!
I saw the number 777 that day twice which meansThe angels applaud you… “congratulations, you’re on a roll! Keep up the good work and know your wish is coming true.”
This is an extremely positive sign and you should also expect more miracles to occur! Wow! 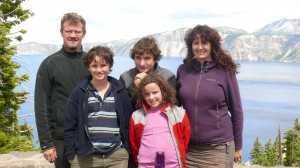 Crater Lake was absolutely stunning. The blue is so brilliant because of the water refraction and depth of the Lake. We were blessed with a beautiful clear sky. As it was high it was also cold. Once again
we were in the snow! 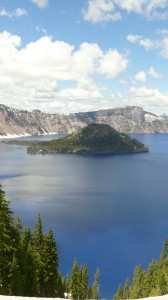 Deciding to continue on, rather than camp in the cold we stopped in Albany and found another KOA. Lara found someone she had been playing with at the Mt Shasta camp so we talked to the little girl’s family! It
rained!  In the morning our tent was for the first time wet and dripping. We needed our two good waterproof tents which we had left with the bike eleven months ago in Seattle it was becoming obvious!
The family we had spoken to last night felt sorry for us, and gave us a tarp to put on the top of the tent for next time. Putting as much as we could in the dryer we packed everything up. It is a horrible job, but Sean was once again a great help. Hard to be cheerful in those situations but it was good to be on the road again and heading for friends in Seattle. We had met Steve and Astara at Mt Shasta and we were looking forward to seeing them
again! Mt Rainier was rained out so Seattle was beckoning! 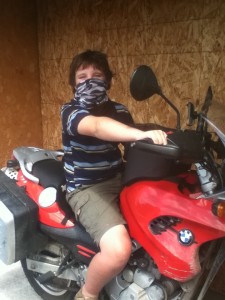 We drove directly to the bike storage facility and saw our bike waiting patiently for us! It was great to grab some warm gear and the two tents.

Two suitcases of warm clothes would now come in handy. We had sent them from
Lima, Peru months ago. 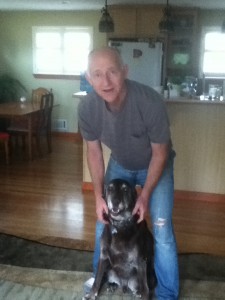 Steve had a lovely big house so we could spread everything wet and damp out to dry. He had three dogs, which we all thoroughly enjoyed! 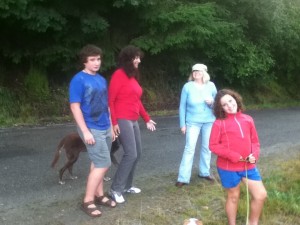 Another God send! Thanks Steve!!!!
Astara had the weekend off so she helped organize us with a few things, Sean and I went with her to a course in
miracles meeting on Sunday, which was a course I had always wanted to do!
They kindly gave us a book for our journey to keep and also some small booklets. How amazingly generous! 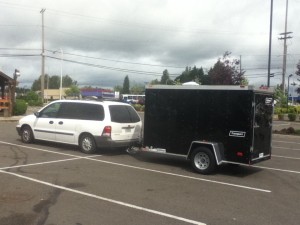 Knowing we needed to buy a trailer we purchased a sleek black one all ready for the motorbike. It was a 5 x 10, just the right size for our car. Being kiwis we were also looking at making a “shelf” inside for the two boys to sleep on. David and I would be below it and Lara at the towing end of the trailer. The bike could be parked outside if we stopped for a while and camped for free. It would be good to have another means of sleeping if it was cold wet or too many bears around for comfort!
Ordering air vents to be installed in the trailer we decided to leave Seattle to do the loop of the Olympia National Park for a couple of days. 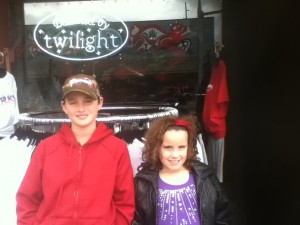 We took Lara to see Forks where some of the “Twilight movies were made.”
We camped that night in another gorgeous, State Park and had a surprisingly
wonderful nights sleep. Considering we woke up to find everything wet! LOL
Astara had given us a key to her son John’s apartment at
Alki Beach in Seattle so we headed for it with wet gear yet again! It was a
sweet little unit and we happily entrenched ourselves there for the rest of the
week. It reminded us of our life living in an apartment in Bondi Beach in
Sydney pre children fifteen years ago. 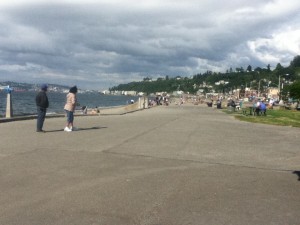 We were extremely lucky to have such a wonderful base. The beach was a short walk away with a Tully’s
coffee shop on the corner. Life was great! They even have fire pits set up permanently on the beach for people to use!
On Friday night we saw Astara again and had infamous “Spuds” Fish and chips on the beach with her. Chocolate brownies she made later on with Lara were delicious!
The next day we saw our first street parade and sat with Astara and her friend Autumn and three girls watching all the different floats.
I loved how they started it. 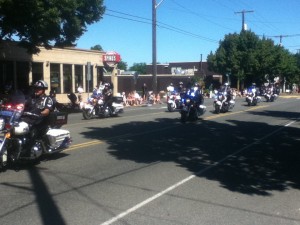 American and then Canadian motorbike policeman on Harleys drove around in loops for our entertainment! It was so nice to be able to give them good energy for the job they are doing instead of the bad they must continually receive!
What a brilliant idea and so nice to see the police from both countries present together!
Speaking to Olivia a friend we had made in Cusco, Peru we arranged to pick her up off the Bainbridge ferry that afternoon. By that time we had Ines with us too so it was quite a squeeze but we did it! Greeting her we all hopped back in and on the highway and drove out to Green Lake, a quieter spot to sit and relax with pizza. We all sat and chatted about our journey and found out Olivia was working on an Organic Farm on the island. It was so good to see her again and looking so well!
That night she and Astara slept in a friends house up the road and we arranged to meet for the next day together.
We had one last day left in Seattle so we wanted to make the most of it!
This entry was posted in Peru, Corinne. Bookmark the permalink.

One Response to Crater Lake and Seattle (Corinne)