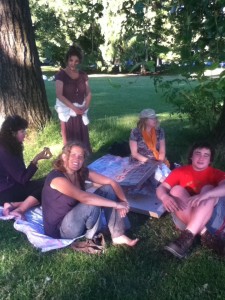 Olivia and Astara arrived at the flat and we decided to investigate what was happening down at the beach. It turned out to be an Art Fair which happened to occur only once in the year. It was a great array of different arts and crafts and a few ideas for us to keep for ourselves. After speaking to a couple sitting near artwork, it turned out they had friends in Dunedin! They gave me a card of the Seattle Market which we hadn’t managed to get to.
We then wandered along and I ended up at a glass jewellery stall on my own. The pieces were quite beautiful and the iridescent colours glowed in the sunlight! I was pulled in by a necklace which was startling in colour. It reminded me of Archangel Michael and I told the man selling them. As I was commenting on just how beautiful they all were he confided that his wife who made them Nancy had passed just in March.
I could sense her outgoing spirit in each of her pieces. I commented that she would be having a ball in heaven! This started him crying and then me! I gave him a hug and commented she must have been and still is an amazing lady as she was “called”. No-one goes before their time. I could see how much he missed her. He told me she had two bookings this year, this being one and he was determined to go to them both on her behalf. He had two people helping him out the back sorting earrings to go with the necklaces. The more he told me about her the more I loved this lady! “She loved the market selling the best” he said,” so she could see the persons expression when they loved and then bought a piece. It was important to her to make sure each work of art went to its rightful home”. Being an artist myself I totally got that!
I bought the necklace that had called to me and commended him on still trying to sell her work. “It deserves to be sold and treasured” I said.
Gathering myself and ourselves together we decided to pick up Autumn and go to Rattlesnake Lake an hour away. 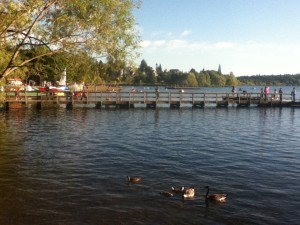 Astara is a great driver and took all eight of us with ease! 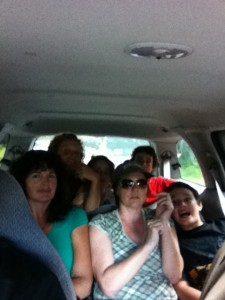 Clear blue skies greeted us and there were people lying everywhere around the Lake just soaking in its tranquil energy. 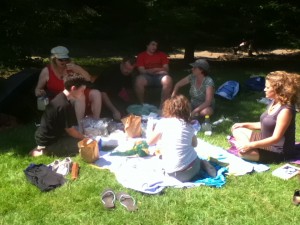 Astara and Olivia had worked magic on the organic vegetables that Olivia had brought from the farm. It was a lovely selection of salad and vegetables for our bagels. We enjoyed lying in the sun and relaxing. 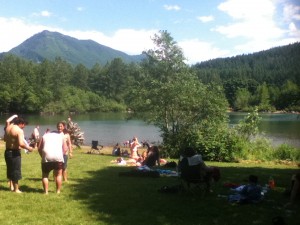 Olivia and Autumn jumped off the rock with the kids. They didn’t have swimsuits but it didn’t matter!
Driving back to Seattle we had to drop Olivia off at the ferry terminal. Sean was already calling her sister! It was great seeing her for the short time we had! 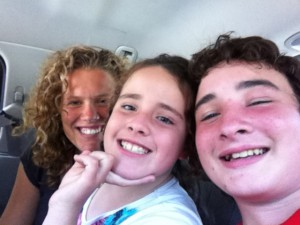 Then it was time to say goodbye to Autumn. Sometimes it feels like we are saying goodbye far too often!
Since it was our last night together; Astara came down to the beach with us. She brought down some sparklers for the children. 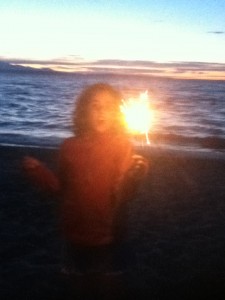 It was a beautiful sunset and we joined a group sitting round a campfire. It was nice to have some extra time with her and have our last night on Alki Beach. 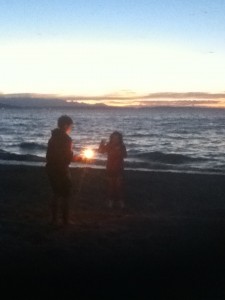 We had decided we were leaving for Canada tomorrow.
Time to get this show on the road for Alaska!