Yosemite and the Spirit of the Waterfall! (Corinne) 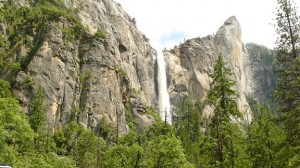 I had seen stickers on cars of Yosemite, and I was looking
forward to seeing it for myself!

We drove through Death Valley after coming from Las Vegas. 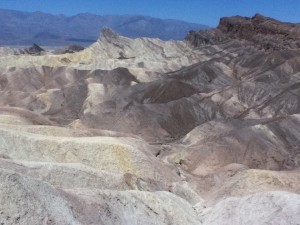 It was incredibly hot as it was 280 metres below sea level!  Stopping for food at Bishop we ate in the car park.  Luck was on our side as we pulled into a camp just out of town called MillPond Park.  We couldn’t have found a better place for the night and only $20! 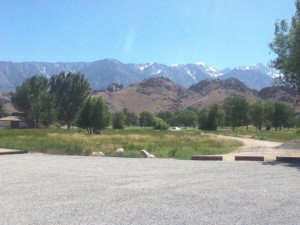 It’s so nice to sleep on grass again with big trees hanging
over us.  The owner said we could sleep wherever
we wanted, so we chose a site with water and decided to pitch the tent on the
grass right beside a gorgeous, gurgling stream. Sheer bliss! The snow-capped
mountains behind us framed the picture quite beautifully. 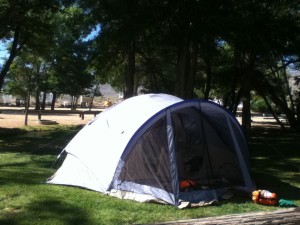 Driving the next day, we enjoyed seeing the jagged
mountains, flat lakes and the odd cluster of wooden houses set around an oasis
of green and trees. 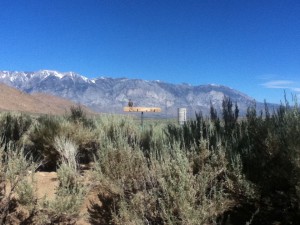 Pulling into Yosemite Park we didn’t really have a clue
what we for in for, except for snow on the mountains ahead. That makes a
change. 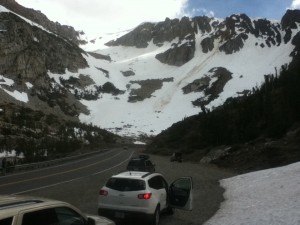 It was a terrific day, we passed mountain after mountain of
snow. Stopped the car a few times for the kids to play and take a few photos. 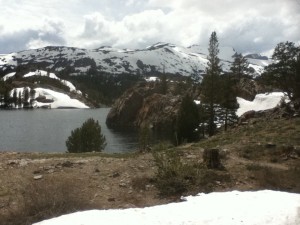 It felt so alive and vibrant. A world away from the heat and dust we had been
through across America’s deserts. 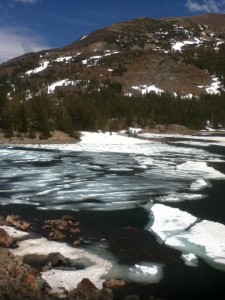 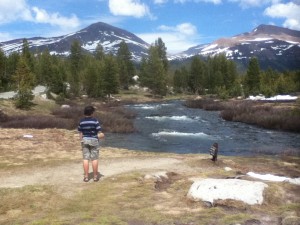 10,000 feet was the highest point, and then a descent all
the way to the bottom. 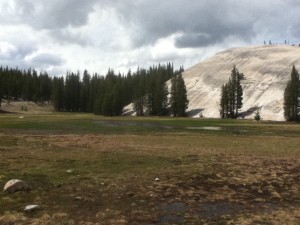 When we pulled over to take photos of a distant
waterfall we could smell the brakes were really hot! What views though! 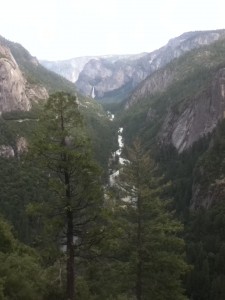 Travelling back in through the Arch entrance of the Park we
were in for yet more of nature’s eye candy. Gosh everywhere you looked was so
entrancing! 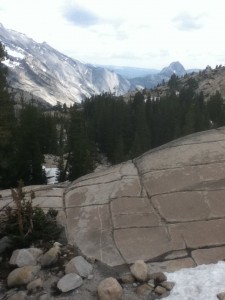 I’d heard the Valley was a highlight and boy they are right! 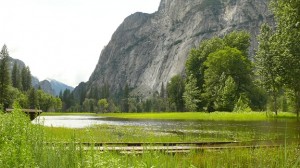 Passing under rocks that were made of schist and granite, we were dwarfed by
their size. The river was raging beside us. You have to see it to believe it.
This place is vibrating at a VERY HIGH rate, and as a healer friend of mine
said there are many souls there which you can’t see. 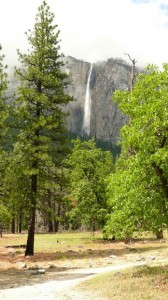 Pulling into the Valley car parks we stopped to just gaze
and admire the waterfalls and sheer mountains, and of course take a few more
photos! 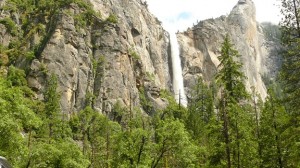 Taking a right we swung into a car park for Bridal Veil
Falls. It was quite busy! You could actually walk to the waterfall – it was
visible above the trees. What a sight! I tried to capture it on camera. Of
course the real thing is so much better! 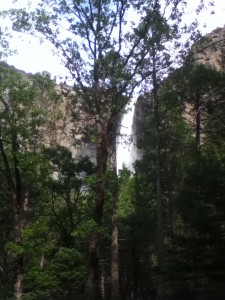 As we started walking up the trail with all the other
tourists, I couldn’t help but notice different crosses around their necks to
symbolise their religions. It drew them all here as it had with us. 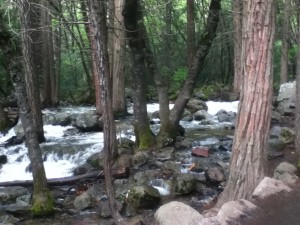 Then a funny thing happened. I had a strong pull of energy
and felt goose bumps all over. The last time this happened was high up in
Ecuador at a Lake. It was happening again. As I looked at the people walking
quickly ahead of me I felt a feeling I can only describe as feeling as though I
was on my way to a shrine or sacred place. A place where
magical healing took place!

I told David what I was feeling.

Intrigued we noticed people were coming down the path happy
but very wet! 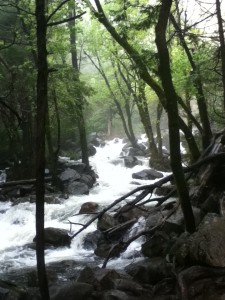 We kept going. Ahead we could see it was as if heavy rain was
falling. We started to run. The water was gushing all over the path but we
wanted to get to the end of the track and see it.

Sure enough we arrived just beneath the pounding waterfall.
Getting completely drenched we held our hands out happily as there was a
marvellous presence there and would you believe it, a little rainbow! I could
hold out my arms and touch the end of the rainbow in each hand.

Words cannot describe the feeling as we stood there, for
only a few seconds soaking up the energy. It was only later that we learnt that
the Indians believed the Waterfalls have spirits in them. We had found another
Sacred Place.

We are surely blessed to be not only seeing, but sensing all
this! 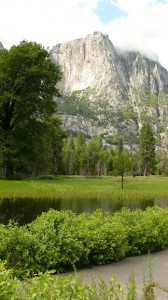 That was the first time I was happy to be wet and cold. I
had just experienced something extraordinary and something I will never forget!

One Response to Yosemite and the Spirit of the Waterfall! (Corinne)