One “AMAZING STORY” we heard in Oklahoma City (Corinne) 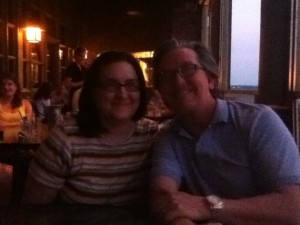 We didn’t know much about Oklahoma City except David recalled an old cowboy movie of John Wayne’s about the big land grab here, when it was first settled. He seemed to remember everyone running to stake their claim by grabbing a flag.
It’s big as Auckland. Population – one million. We were staying with a family on the other side of town. They had kindly accepted our request to stay with them from the www.couchsurfing.com website for a couple of days.

It is an amazing idea that we are already fans of! You register to be in a community of people worldwide who you can request to put you up for the night or nights if you are in their area. Or if you are not traveling but want to meet people who are, then you yourself can host. It’s a great way of meeting like-minded people, making new friends and if you are lucky, meeting up with them again one day! It’s based on principles we already believe in “what goes around comes around”. Its ideas like this that are changing the world as more and more of us connect with each other and I believe change the world for better!

We know everyone we meet on this trip we were meant to meet. This was no exception! Tim was not your normal guy! After kindly making us dinner that night, he filled us in on as much of his life experiences as he could, in just a few hours. He had an excellent book in him, newspaper article and sixty minutes interview just waiting to be discovered and written about!
He was doing things ordinary people just can’t or should I say wouldn’t do. Breaking down barriers, changing people’s lives and in the space of a very short time on occasions! There is so much going on with him. Always has been….and he knows how to follow the flow of coincidences that come his way. “It’s just the way God directs me” he says.
I will give you a brief on just one of his stories. I hope you don’t mind Tim but you’ve got to start getting this out there now!
He started speaking about what was going on in the City of Detroit after we told him about the homeless people we had seen while traveling through South America and those that we had already seen here in America. Detroit has lost its heart” he said. What a story transpired.
He went up there to look at buying property for investment and starting a community of people. He wanted to know what had happened to the City.
When he went to Detroit he was told not to go Downtown. You don’t tell Tim not to do anything! He promptly went directly there talking to everyone he met! He wanted to know what had happened to the town, as huge suburbs are now empty and houses are worth a fraction of what they used to be. After a full day of talking to people, night started closing in. For once he realised he had lost his sense of direction, and started praying to God for help to get back to his hotel safe and sound.
A black man came to his side and said “what are you doing here? You know it’s not safe here for a white man at night. Tim told him where he needed to go and this man took him to his destination safe and sound. Along the way he was barely glanced at with his new companion assisting him. He was someone everyone seemed to know. He now had his own divinely sent helper!
Once there Tim could have just thanked the man and carried on for the night – but that is not Tim! He had already worked out that this guy was homeless, and questioned him about what had happened to him. He used to work at one of the Car Factories earning $28 an hour. Then he was laid off and lost it all. He had been on the streets eight months. He didn’t want to leave Detroit he told Tim. He had grown up there and still called it home. Because he had walked Tim to safety he had lost his bed for night in the shelter, as the curfew was already up and it was a long way from where he was now. Tim knew this guy was a decent man. He told Tim he knew of a place that was safe with a few other guys to sleep for the night. Accepting that, Tim asked him where it was good to eat breakfast in the morning. The man told him of somewhere close by where the food was really good. Tim arranged to meet him there at 6am. He wanted to buy him breakfast at least.
Once eating and talking the next morning, Tim then started asking pertinent questions. He asked him what he would love to do if he could.” Car detailing” the man said, but he said there was no where he could do it., as you aren’t allowed to do it on the streets here. “You have only one problem” said Tim “you just need confidence”. Tim was already in action. He had a plan. He asked the man if he could employ him for the day showing Tim the City. he wanted to see all the good places and the bad places. He then told him to write up a business plan for his car detailing business. The man said he’d never done anything like that so Tim told him to imagine he was asking an investor to invest in him and show how much he could make a week, month and year from a business like that.

After gaining this man’s trust he took him to a shop and paid for him to be dressed in new clothes. He told the homeless man “We are just going to try a little experiment!” They then went all over the City and Tim was shown all the good areas and bad areas. Then they both went to the real estate agent that Tim was using.  Tim told the woman to take his “business manager” to the eight houses she had narrowed down for him. This man would look at them. The woman had no idea this man was homeless, because he was well dressed she considered him to be just like anyone else. Tim left them to it after telling his new friend to work out which house was the best for Tim to buy.

At the end of the day Tim met with him to find out how it went. She had shown him all eight houses and he told Tim which one he thought was the best. Tim asked the woman if she knew where there was a place you could have the use of an office paying by the hour. There’s one in this building she said that does just that.
Tim wanted to see the shelter where the homeless man usually stayed, so he took Tim to the shelter where he had stayed so many times for the night. Apparently after the first 150 men everyone else is turned away. However this time was different, as he and Tim went to speak to the Manager. Tim knew how to ask all the right questions… He said “just imagine my business manager here was homeless, how much would it cost the shelter to care for him every night for a year?”” $17,000 a year, with a meal and shower included” was the reply. Tim then asked if there were grants available from the council for these men if they wanted to start up their own business. “Yes” he said, “Is there a template for the application?” said Tim. “Yes, I have the forms here” said the Manager. “Could you print them out now please” said Tim.

Tim went outside with the forms and noticed that the man was crying. Tim asked him why and he confessed “I’ve stayed here so many times and no-one has ever told me about that!” The manager hadn’t even recognised him as someone who had slept there before, even though he had passed him probably dozens of times!
On the way to the real estate agent Tim and the man discussed the house for $10,000. Tim floated the idea that he could buy it with the money from the grant if he got it. The man said “but by the time you pay for all the other fees it would be more like $20,000 for the house”. Back to the Real estate agent they went.
Tim then told the lady that his business associate was a homeless man. She thought he was having her on and couldn’t believe she’d just spent the day showing him all the houses for sale. Tim then produced the grant application for $10,000 which the man had applied for, showing his business plan and also including the premise that five other homeless men would live there. It was going to save the council a lot of money and was immediately accepted. He told her to find out if she could get fees, taxes etc. reduced so that the money could buy the house the man had selected that day, for a total of $10,000. She was in shock about the whole thing but agreed to do it.

It made quite an impression on her as she had never really looked at homeless people before and he said to her “ They need houses and you are in the house selling business” She organised the whole deal and Tim said now she really looks at everyone differently. It has changed her perspective.

The homeless man now owns the house and there are five others who were previously homeless who are living there with him. All in their own bedrooms! Tim laughs and says he is better off than him now!

The car detailing business has become a reality and they all work on the cars in the garage of the house. Apparently he gets his business by approaching businesses nearby for work. He has had cards made to give out. He brings the car to his property to work on in the garage, and takes it back again after the work is done. He and the other men have made employment for themselves!
Tim did all this in the space of a day. He still keeps in touch with the man every so often.
It’s been hard for me to write this without tears in my eyes. This would be a fantastic 60 minute episode!

Tim, I have done my best with your story. I know you give all credit to God but the story needs to be out there! These are the stories that can change the world. One person can make a difference!

I hope I haven’t made too many mistakes with it!

Now it’s your time to start telling your stories yourself….

With love from Corinne, David, Sean, Braden and Lara